Crusoe College, located in Bendigo, Victoria, educates 820 students from Years 7 to 10. It is a public school and is one of four colleges built in line with the Bendigo Education Plan in the early part of the 21st Century.

School Business Manager Gerry Truscott contacted Premier Lockers when he identified that the College’s 15-year-old wooden lockers were outdated and in some cases in poor repair. He reached out to Premier Lockers, which offers the most comprehensive range of school lockers and high school lockers in Australia, to discuss the school’s new locker requirements. 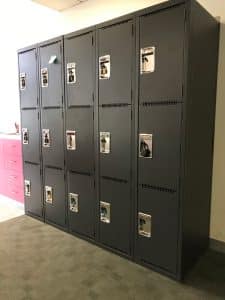 “We firstly identified that the timber lockers we had were easy to damage and the locks would often come off. We felt they had done their work over 15 years,” explained Truscott.

Truscott started to look around for replacement lockers and pretty quickly concluded that the College would be better served with more durable steel lockers.

Over that time, the needs of students had changed because the items students needed to store in lockers had evolved. New lockers needed to be bigger than the previous ones to accommodate backpacks without squashing them. There is also an increase in electronic equipment and a decrease in books.

“Once we selected Premier Lockers as our supplier, we got a sample locker for the students to review.”

“Rather than just order the new lockers to fit a space or a budget, we asked our students what they believed we needed. We consulted our school captains about what they and their peers wanted. Once we selected Premier Lockers as our supplier, we even got a sample locker for the students to review. It was via this process that we added an extra high shelf in the lockers at their suggestion,” said Truscott. 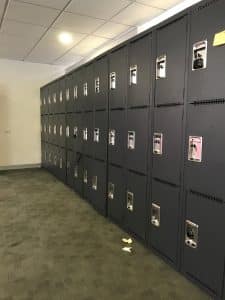 When Truscott contacted Premier Lockers, they provided a competitive quote and promptly replied to his queries.

“The price Premier Lockers submitted was similar to other quotes but the response times to queries was better than others. After they provided the initial recommendation, we made some changes, which was very easy to do. They were very obliging with our requests, like moving the internal shelf higher,” said Truscott.

The lockers are in blocks of three and two high and spread around the school to make them easy for students to access. Crusoe College initially ordered 828 lockers and has since added about 70 more.

The students at Crusoe had previously used their own padlocks on the wooden lockers so the decision was made to stick with those as a locking system.

“I’m very happy with the new lockers. The delivery was on time and the transport company was happy to unload in multiple locations around the school.”

“It meant that students didn’t have to change to a new system and parents didn’t need to purchase a new lock. Students can buy a padlock from the school or supply their own,” said Truscott.

At the beginning of the year, each student is allocated a locker and can put a sticker on it with their name and take ownership and responsibility.

New lockers get the thumbs up from students

The feedback from Crosoe’s students has been really positive with comments like ‘great’ and ‘fantastic’, and no complaints.

“From my perspective, I’m very happy with the new lockers. The delivery was on time and the transport company was happy to unload in multiple locations around the school,” said Truscott. 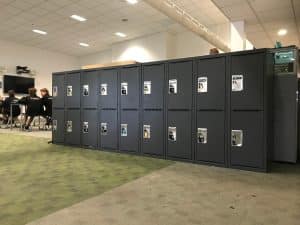 Once the lockers were installed, the College decided to make them sturdier by installing a bracket to attach them to the wall, and to prevent any chance of them falling over. They worked with a local company to design and install the bracket.

Gerry Truscott says he would definitely continue to use Premier Lockers.

“As student numbers increase, we will be purchasing more lockers and are keen to keep them all the same.”

Are you a school facility manager looking to refresh your school by introducing new lockers? Call Premier Lockers on 1300 202 557, or email sales@premier-lockers.com, and let’s work together to find the best solution for your school.