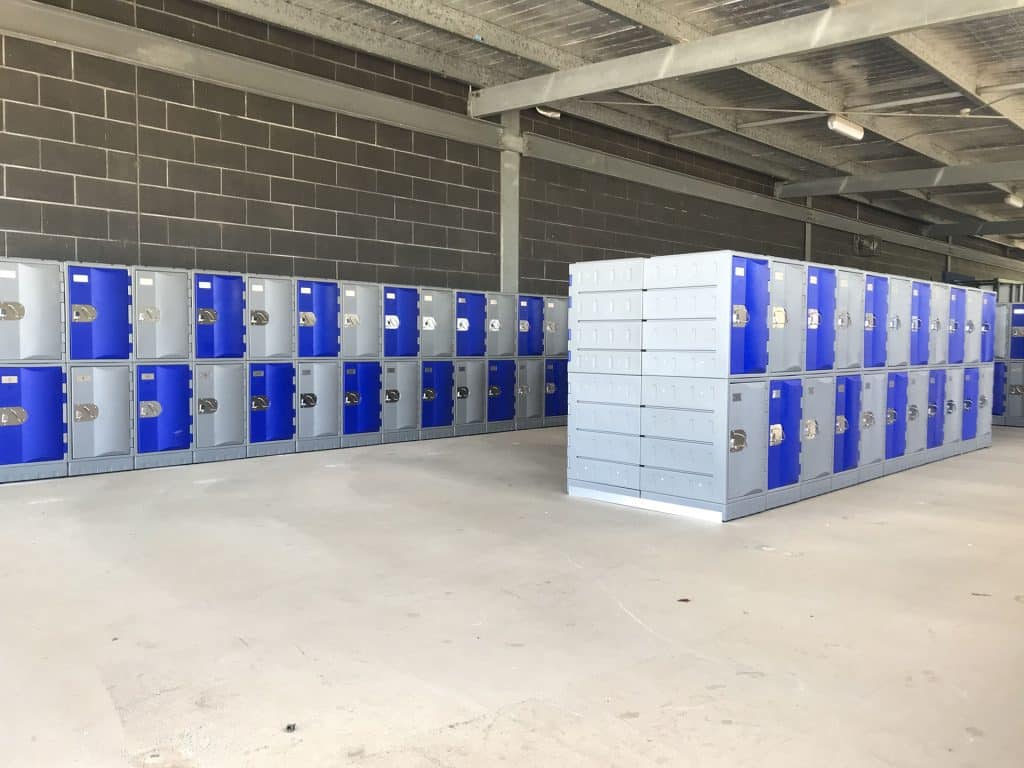 Point Cook P-9 College, 30 minutes south west of Melbourne, opened in 2010 as a public-private partnership agreement and in 2020 has 1,600 students from Prep to Year 9. The Secondary School (Years 7 to 9) numbers approximately 500 students.

The school was initially fitted with interior wooden lockers. However, the Secondary School students were outside in portable classrooms, with no convenient access to the lockers. As such, the students who most needed lockers didn’t have access to them.

The existing lockers got distributed throughout the school. Teachers were using them as personal lockers, while some were even being used as wall dividers. The only students that were using the lockers were Year 5 and 6 students. Meanwhile, the Secondary School students were using plastic tubs as lockers, which would normally be reserved for use by primary students.

Point Cook P-9 College’s 500 Secondary School students had access to a limited number of lockers, but the lockers were dated, weathered, and in an inconvenient location that required school staff to be present when students were accessing the lockers. As such, the lockers were rarely utilised.

The existing lockers also didn’t fit in with the positioning of the Point Cook P-9 College as a state of the art 21st Century facility. The challenge for Premier Lockers was to create and deliver a locker solution that was more closely aligned with the positioning of Point Cook P-9 College as a modern learning facility that provided everything Secondary Students need to succeed. On a practical level, Premier Lockers was tasked with:

“I wanted something fairly strong and sturdy that could survive outdoors, and made from recycled plastic,” explains Principal Mandy O’Mara. “Something that people could walk up to and kick and not collapse. I wanted something that we could match to our school colours, and large enough for the kids to put a bag and their resources in. Something that we could use or own padlocks on, rather than having combination locks on the lockers. And definitely an outdoor locker.”

“The Premier Lockers representative really sold the lockers well,” Principal O’Mara says. “We weren’t really sure where to put the new lockers, so we spent a lot of time working with him on where we should locate them and make sure that there was some cover for them. He really knew his product and it was because of his service that we went with Premier Lockers.”

Premier Lockers conducted a site assessment to determine the best location for the school’s new lockers. The Premier Lockers’ solution was 450 two-door heavy duty plastic lockers, with provisions for their own padlocks. Made from high density polyethylene, each locker features a shelf, stainless steel locker door numbering, and a base that lifts the lockers up off the ground.

“As every school grows, they look to upgrade,” explains Premier Lockers’ Director Jim McAlinden. “You can get really cheap lockers that are almost disposable products, or you can pay more and get lockers that are built to last.

“We had to come up with a solution that would enable the lockers to be placed outside. There was a quite involved consultation process. We tried different locations and there were lots of discussions with school staff.”

Based on advice from Premier Lockers, Point Cook P-9 College decided to convert half of their bike shed into a locker bay.

The Premier Lockers team conducted a number of site visits to ensure that the new lockers were installed in the best location. Even though the new lockers waterproof, they still needed to be undercover for when it’s raining.

The work by Premier Lockers was completed in time for the commencement of the 2020 school year. For the first time in the school’s 10-year history, all Secondary School students at Point Cook P-9 College now have access to their own personal lockers.

“When I moved to the school as Principal in September last year, I was keen to make sure the kids had lockers that made them feel like secondary school kids,” Principal O’Mara explains. “And they’ve loved having lockers this year.”

“Lockers are almost like a rite of passage for students; it’s that symbolic move from Year 6 to Year 7. So symbolically it was the right thing for us to do. The investment in lockers are one thing that we’ve done to make them feel more like secondary school kids. And I think it’s absolutely worked. I would recommend Premier Lockers to other schools.”

Is your school looking for new lockers to start school year 2021?

Call Premier Lockers on 1300 202 557, or email us, and let’s work together to find the best solution for your school and for your students.